I am so shocked and disappointed that over 2000 readers saw my request for a little help for Lupita and only one responded, I have decided to stop writing the post.

WordPress actually allows me to see how many people are reading this blog. About 60 people per hour on a b48 hour basis. I spend hundreds of hours writing this. ! person answered my request to help Lupita? 1 person? gave enough of a damn to give $50 Seriously? Wow!

Why am I writing this?

Seriously people this isnt fiction. I know a girl that needs a break! Holy Crap. Open your wallets She needs some help. I need some help holy Crap!

I am not some irresponsible asshole asking for you to donate money, WTF?
% bucks will it kill you? Christ!
I am so sick of writing this shit thousnads of good pictures, hours of stories and when you ask for help, 1 other rider who is really a long distance rider gets it and steps up. 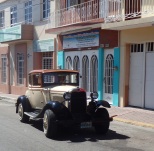 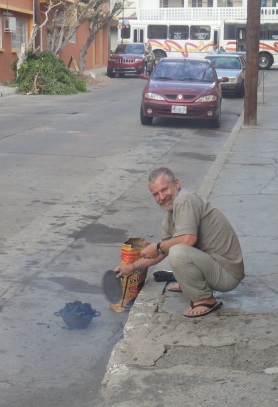 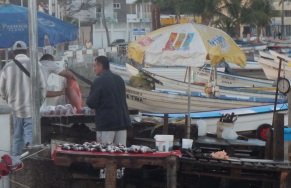 FT write up on Mazatlan

Lupita at her Work

It has been the calm before the storm here in Mazatlan. The Carnival starts today. The preparations are amazing. Down at Olas Altas beach the have about 6 stages set up and a beer stand every 50 feet or so. This is going to be one crazy place.

The picture of the dinner I have shown, Albondigas. Is a dish my friend, Shoe loves. It is very good. He mentioned the dish to Lupita and asked if she new any restaurant around to get it. She made the dish for us at home, brought it to her work and fed supper to Sandra, Shoe and Me. Amazingly kind and thoughtful.

Albondigas is like meatballs, with rice and red and green peppers in them they get boiled in the spicy tomato vegetable soup. Very good!

I want to tell a little story and ask if any of my readers would like an opportunity to offer a hand up to my friend Lupita.

This young woman is as kind as they come. When Shoe and Sandra first introduced me to her and told her I was from Canada the first thing she said to me was “Canada, all my life I have dreamed of being able to go to Canada”

Lupita will never realize this dream without some help. Wages of course are low in Mexico and she works six days a week to support herself and two beautiful little girls who are 9 and 15, Abril and Livily.

She has been kind to a fault to Sandra, Shoe and me. She takes the time to listen to my terrible Spanish and is helping me with grammar. She constantly has a beaming smile on her face and is very kind and gracious with all her customers.

I would like to offer my readers an opportunity to help me make Lupita’s life long dream come true. I would like to see she gets a trip to Canada. Angele and I would happily give her a place to stay and show her around NB. I think a ticket is around $1500. An amount that is small enough I hope it won’t stand in the way of Lupita’s dream. If there was ever anyone deserving a little help, it is Lupita.

Last year I asked my readers for help with my friend Steph’s cause to help school kids in Nicaragua and they very generously donated over $2000 to that worthy cause.

Make no mistake, Lupita has not asked for anything. She has no idea I am doing this. I know none of you have met her and have to take my word for the kind, deserving, generous person she is. Please do not feel any obligation but if you can help, even a little, please do. You can change this girl’s life. She has never even been on an airplane. This would be the trip of a lifetime for her, but more than that maybe the only trip of a lifetime. If you can help me help Lupita I would certainly appreciate it.

I did some research yesterday on the visa requirements. It will be tough but not impossible for her to get a visa. I think I can make this work with your help. Thanks. Kedgi

Just click on the link below to make a donation and hopefully you will be reading about Lupita’s trip to Canada on my blog before long. here’s is your chance to help change the life of a deserving young woman.

No pictures today but a nice story to tell instead. I had planned or more accurately I guess Lupita had planned to meet me at the Puerto Viejo for lunch on her only day off, yesterday, Sunday. We figured we would be watching the Daytona 500. No such luck, rain delays, etc we never saw any Nascar, Fox Mexico showed some of the closing ceremonies from the Olympics instead. So my friend Lee who had walked down to the bar with me left and I waited alone for Lupita.

She arrived and I think was quite surprised to find me there alone and likely wondered if she had been or was being set up. In any case we went to lunch as planned at the Copa de Leche where I know they have wifi in case I had to use my cell phone to translate anything. We sit down and the first thing she asks is “do, you have a wife?” ..”yes but I hope that doesn’t mean we can’t be friends” I explained that my wife knows I have met her and is happy I have a friend willing to speak Spanish to me, no secrets, honesty. That seemed to satisfy her, at least she never ran away and we proceeded to have lunch. She seemed a little nervous at first but got over it slowly. (This is all done by way of my iphone translator of course, that amount of Spanish is way over my head)

Immediately after that, the wifi failed, apparently all over town, and no more electronic translation was available. Probably the best thing that could have possibly happened. Now we had to talk. Well, either that or sit there in uncomfortable silence. So, we struggled through, and it was a struggle at first. Lupita has about 4 or 5 words of English and my conversational Spanish is really really basic. My verbs don’t get conjugated, my pronouns are a mess, but I do have some words and a willingness to try and communicate and most luckily Lupita has a willingness the bear with me through it all.

I explained I am like a baby learning Spanish and we started off by my asking her the Spanish word for fork, spoon, plate, table, whatever was at hand. I would use a Spanish Phrasebook I had, to ask a few questions. It all worked out OK. Lupita soon learned to use the phrasebook too to show me a word I didn’t understand.

After lunch I wanted to show Lupita the view (buena vista) from the top of the Freeman Hotel. It is stunning and I really doubted she had ever been up to their rooftop deck. We got up there and her jaw dropped. She had never seen her own city from that perspective. (I gotta tell you it is one absolutely outstanding view) She had never seen this beautiful view in her life and was stunned at the beauty of her own city. I think she began to see it through the eyes of us visitors.

It occurred to me, since we could see so much to start pointing out anything I could see and knew both the English and Spanish words for and tell her the English. Worked like a charm. We saw the Sea, the seawall, cars, trucks, streets, roads, buildings, patios, palm trees, on and on and then I started asking words for things I didn’t know in Spanish. It was great. She says to me, Esta divertido! It’s fun! It was fun!

So to make a long story short, maybe it’s too late for that. I had a great afternoon with Lupita. I learned a lot of Spanish, she heard a lot of English, she corrected my grammar in a lot of cases, and I learned a few things. She got a start on the English she wants so badly to learn. It was all good. Mutually beneficial and fun. She told my friend Sandra, my bilingual friend from Costa Rica who introduced me to Lupita, she had fun and would like to do it again. Great!

It was travel at its absolute best. Meeting a really nice person, both learning a new language, and having fun. I couldn’t have imagined the afternoon working out any better. 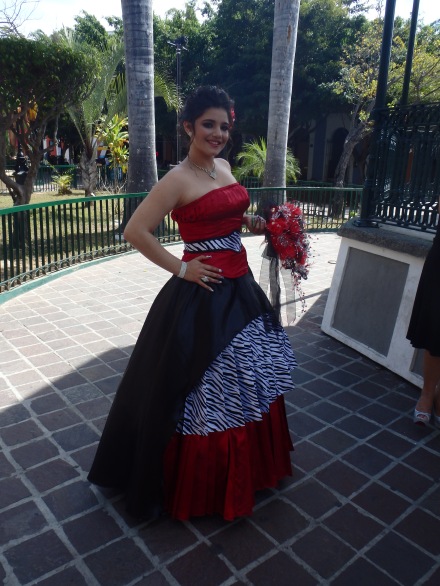 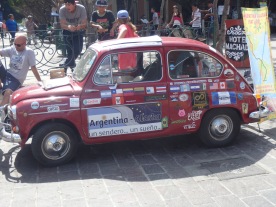 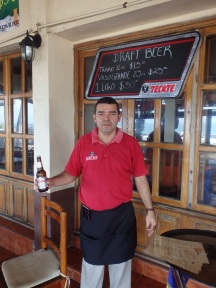 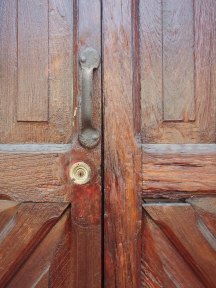 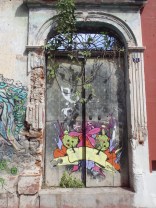 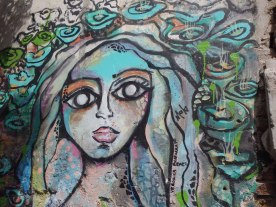 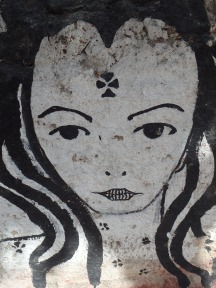 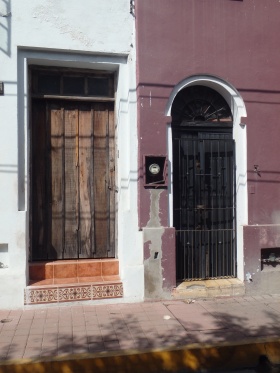 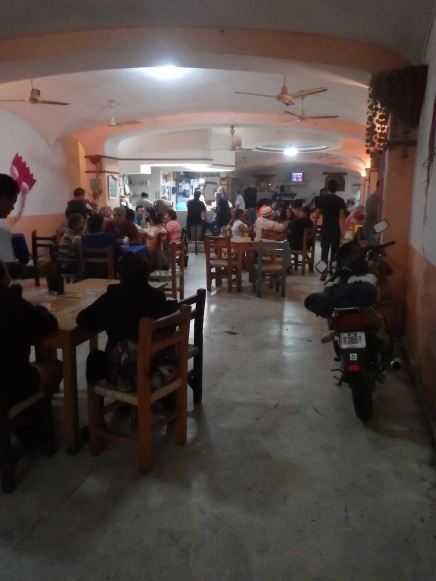 Had a great walk around Mazatlan yesterday.

I saw the beautiful young lady in the gown in a Park, not sure what was happening. She and a couple other ladies seemed to be waiting for something. I am guessing whatever it was it was related to Carnival. She was so elegant I asked if I could take her picture and she immediately struck a nice pose. Cool!

I saw two guys driving an old Fiat 600 from Argentina to Alaska.

The gentleman, Ernesto is the kind waiter at my favorite place to go in the hot afternoons, La Copa de Leche, Ernesto. He and I have become friends. He is very nice.

I finally got a decent shot of what it looks like to walk into the Club Desportivo, Puelellos where my friend Lupita works.

They arrested the head of the Sinaloa Drug Cartel about a mile up the beach from my motel this morning. We were all awakened at 5am by the roar of a military helicopter flying low over the hotel.

I have been going to a convenience store or tienda around the corner from the Hotele Lerma. The owner, Jose has been very friendly and nice. I invited him out to lunch with me and he accepted. We went to La Copa de Leche on Olas Altas Beach and had a great lunch. Because it is in a tourist area prices are higher than you find around town but the location, the food and the service were excellent. Price for this fine meal and three cokes came to about $20.00 with a tip.

Jose moved to Mazatlan seven years ago from Mexico city. He learned English working with the tourists on the beach in the Zona Dorada. He has very good English and during lunch he taught me a couple more things in Spanish. He spoke very highly of Mazatlan. He’s very proud of his city and rightly so, it’s a beautiful place. He and I had a great day.